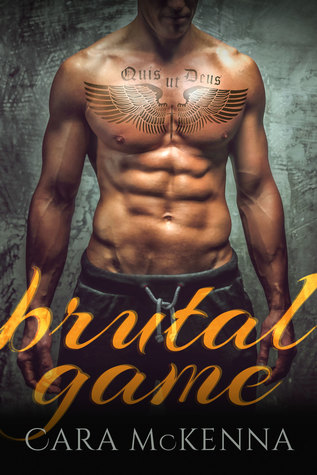 Eight months ago, Laurel walked into an underground boxing gym and found herself mesmerized by a stranger named Flynn—a man who fights hard and loves harder. Since then he’s taken her places where fear and curiosity clash in exquisite pleasure, where trust is the price of ecstasy, and in time their brutal games have become her kink as much as his.

But when real life intrudes and hard decisions demand action, will these two whose bond is rooted in fantasy take shelter in each other’s arms, or discover that lust is no substitute for a lasting commitment?

When I finished Willing Victim by Cara McKenna a few years ago, I was completely satisfied with the way things ended. It was a thrilling ride – at times deep, at times shallow, but always perfect. When I found out we were getting a sequel, there may have been squealing. Brutal Game was the follow-up I didn’t even know I wanted, so I began looking forward to it immediately. Did it live up to my expectations? Not really. That’s not to say it wasn’t a decent read, it just didn’t live up to its predecessor in my opinion. While this book was as intense as the first, it was a different kind of intensity that I just didn’t enjoy much. There were parts where Flynn didn’t feel like Flynn to me, and it wasn’t until I began reading this book that I realized how little I really knew [about] Laurel. And I fear maybe this book was a bit too real for me.

I do love their fierce determination to be together – Flynn insisting he knew it wasn’t going to be easy with them, but she was important enough for him to stay; Laurel candidly telling him he’d ruined her for any other man. And yeah, I’m a fan of their sex life at the beginning of the story. But it was things that maybe shouldn’t have held such impact that did.

I thought Flynn’s sister, Heather, was a nice addition to the story. She was very supportive of both Flynn and Laurel, and I think she was able to remain neutral about things and not impose her views on their situation. And interestingly enough, while his character has still maintained an air of mystery, I think Flynn is more transparent than Laurel.

While I didn’t enjoy this Cara McKenna book as much as previous ones, I think a lot of people are going to love it. I was looking for more heat and sexiness here, and because it wasn’t the dominating force in this story as I’d hoped, I was disappointed. But even saying that, I think Brutal Game is a must read for McKenna fans, especially (and only if) you’ve already read Willing Victim.