Off Base by Annabeth Albert | Out of Uniform #1
Military/Contemporary Romance, LGBTQIA
Publishing on January 9th, 2017
ARC from the author

After trading the barracks for a fixer-upper rental, navy SEAL Zack Nelson wants peace, not a roommate—especially not Pike, who sees things about Zack he most wants to hide. Pike’s flirting puts virgin Zack on edge. And the questions Pike’s arrival would spark from Zack’s teammates about his own sexuality? Nope. Not going there. But Zack can’t refuse.

Pike Reynolds knows there won’t be a warm welcome in his new home. What can he say? He’s an acquired taste. But he needs this chance to get his life together. Also, teasing the uptight SEAL will be hella fun. Still, Pike has to tread carefully; he’s had his fill of tourists in the past, and he can’t risk his heart on another, not even one as hot, as built—and, okay, yeah, as adorable—as Zack.

Living with Pike crumbles Zack’s restraint and fuels his curiosity. He discovers how well they fit together in bed…in the shower…in the hallway… He needs Pike more than he could have imagined, yet he doesn’t know how to be the man Pike deserves.

Off Base was trademark Annabeth Albert – one hero who is out and proud, and one who is coming to terms with his sexuality. Or, in Zack’s case, debating on coming to terms with it. At the back of the closet. Behind the ugly Christmas sweaters from six years go. And Pike’s not sure that’s something he can deal with. But for Zack, he’s going to try.

While Pike was my favorite, it was a bit before he was able to win me over. Seeing him through Zack’s eyes, with what eventually became clear included a lot of self-loathing, was not very flattering at first. Zack was a lost young man, and it was Pike’s patience with him and his understanding that made me fall in love with his character. Pike is in a place he knows well – there’s mutual satisfaction in the bedroom, but that can’t carry into the ‘real world.’ Not with Zack’s career as a Navy SEAL and the harassment he’s getting from one of the members of his team who is aware of Zack’s sexuality. He’s convinced coming out could only make things worse for him; the views of his ultra-conservative parents only solidify that thought. I understood where Zack’s fear was coming from, and I love that Pike didn’t want to rush him into coming out before he was ready. But every time I was reading Pike’s point of view, with his longing and fear, I would get frustrated with Zack. He seemed awfully naïve to me, and I had a hard time believing someone so timid could handle the responsibilities necessary to be a Navy SEAL. The only place Zack seemed comfortable to me was in bed with Pike, and it was then the alpha-side of him came out and gave the reader some very sexy scenes. There was also a scene where Zack’s jealously got the better of him, surprising not only Pike, but himself as well, and I loved seeing Zack finally laying some sort of claim to his man. It was mentioned several times how close Pike was to his mother, and I really would have liked to see her more in the book. With how sad he was about the possibility of never having what he wanted with Zack, I would have liked to see someone in Pike’s corner, catering to him a little bit and letting him know what an amazing guy he is.

Overall I really enjoyed Off Base. It wasn’t quite up to par with the previous books I’ve read from this author (and yay for seeing some of my favorite #gaymers,) but it was still a solid, hit you in the feels read. I’ll be hanging around to read the rest of this series! 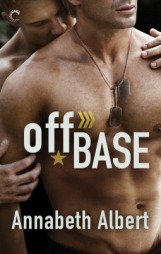 8 thoughts on “ARC Review | Off Base by Annabeth Albert”