Absence is as crucial as presence.

The decision to stop dating has made Vaughn Hargrave’s life infinitely simpler: he has friends, an excellent wardrobe, and a job in the industry he loves. That’s all he really needs, especially since sex isn’t his forte anyway and no one else seems interested in a purely romantic connection. But when a piece is stolen from his art gallery and insurance investigator Jonah Sondern shows up, Vaughn finds himself struggling with that decision.

Jonah wants his men like his coffee: hot, intense, and daily. But Vaughn seems to be the one gay guy in Toronto who doesn’t do hookups, which is all Jonah can offer. No way can Jonah give Vaughn what he really wants, not when Jonah barely understands what love is.

This book took me so long to get into, and quite frankly, I’m not sure why I stuck with it. But I am really glad I did, as I ended up enjoying it. I adored Vaughn and his easygoing, and at times, boyish nature. He was so honest and kind, just the sort of guy you’d want in your circle of friends. I love that he was so willing to just go with the flow. He wasn’t one to question why life was the way it was. It just was, and he was going with it. Jonah, on the other hand, was Vaughn’s complete opposite. I felt like he went with the flow, but it was a deliberate choice instead of being part of his nature. Jonah spent his life trying to appear normal, but I get the feeling that he was really looking for love…in all the wrong places, as they say. This book gives a new meaning to slow build, and I’m sure that was intentional and directly related to Vaughn’s indifference (or possibly aversion) to sex.

Now, I loved the friendship portion of this story. I like that Jonah found Vaughn intriguing enough that he was willing to stop bringing sex into their relationship and try to be buddies. But the part where they actually do decide to delve into relationship territory and make the choices that would work best for them was a bit dicey for me. I didn’t understand the haste behind their decisions, and why there weren’t different things they could try. But I’m going to be honest – after this book, I don’t think I have a grasp on what asexuality is at all, and while I don’t understand their choices, I don’t think the credibility of them depends on me ‘getting it.’ So while I’m not totally sold on the way things ended up, I did appreciate this story.

The ‘mystery’ behind the missing paintings was predictable, but that was fine with me, because that was just the catalyst for what brought Jonah and Vaughn together. I don’t think it was really meant to be suspenseful or a whodunnit. I think the pacing of this one was OK; if it had been a bit tighter, maybe the story would have gripped me from the beginning. The highlight of this book for me was ‘the drunk scene.’ It was quite possibly the best drunk scene I have ever read, and it left me in stitches. Just when I thought Vaughn couldn’t get any more adorable, he goes and turns into the giddiest drunk ever and proved me wrong!

When Blank Spaces finally pulled me in, it pulled me all the way in, and I ended up loving this story. If you’re a fan of quirky characters and hard won relationships, this book is right up your alley. 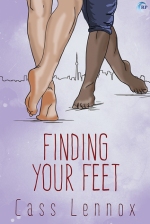