To hell with Valentine’s Day. As a single person, this holiday doesn’t cater to me (which I’m fine with, as the world doesn’t revolve around me,) but what’s worse – it’s not a national holiday. So not only am I reminded that I’m single, but I get to work all day. This Valentine’s I am going to live with my head in the clouds and think of all my favorite book heroes and why I love them so much. Some of them I love for dirty sexy reasons, and some for sweetsy romantic reasons. I thought I’d share who some of my favorites are and why I want #justonenight with them, because, as everybody knows, Valentine’s night is much more interesting that Valentine’s Day.

If Mystery Man isn’t my favorite Kristen Ashley book, it’s damn close. I loved that Gwen was so girly and how honest she was with herself, even when she wasn’t painting herself in the best light. Her inner dialogue had me in stitches. And Hawk – there were a lot of reasons to love him, despite the fact that that man pushed my buttons like no other hero. His fierce protectiveness was sexy as hell, as was his bedroom prowess, which hooked Gwen from the beginning. I can’t blame her; it hooked me, too. And just to add a touch of adorable to their relationship, Hawk calls Gwen ‘Sweet Pea.’ Soon!

I want one night with Hawk for #filthyreasons.

This is a man who can awaken the filthiest of desires – ones you didn’t even know you had. He sure did for Laurel in Willing Victim by Cara McKenna, and he whispered the dirtiest things while they were carrying them out. But even through all that filth and raunch, Flynn wanted to make sure he didn’t right by Laurel.

I want one night with Flynn for #dirtyreasons

Right…so I’m ill-equipped to insert myself into this scenario, but that’s OK. I’d be happy to just pop some popcorn, pull up a chair, and watch Jamie and Wes go at each other, because really? Who has more fun in the bedroom than these two? HIM by Sarina Bowen and Elle Kennedy just oozes sweetness and hotness, and I can’t get enough of Wes and Jamie. They’re not afraid to ask for what they want, and they love to tease.

Wes and Jamie are at it again #pullupachair

This man’s mouth is so filthy that I (just had to) read this book three times. Back to back. And I’ve read Wild by Adriane Leigh more than that – I’ve just gotten better at pacing myself over the years. And I’m going to say this here and now – I’ve read a lot of sexy books, but as far as dirty talking goes, no one comes close to this man. No one. So if you love a dirty talking hero and you haven’t read this book, you are missing out.

I want one night with Wild #givemethatmouth

And some bonus Wild, because why not? 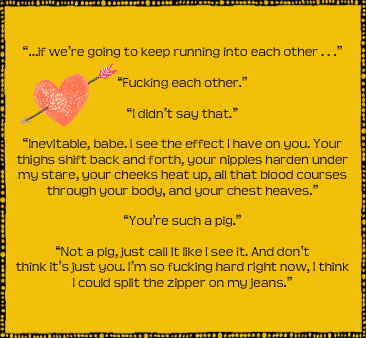 While the first five men on this list will melt your panties, Josh Bennett from The Sea of Tranquility by Katja Millay is sure to melt your heart. I would say that this boy loved his girl perfectly. Josh treated Nastya with the fragility that she needed, but he saw her badass side, too. He knew exactly what she needed and gave it to her, even when it wasn’t what he wanted or needed. Nastya says at one point in this book that ‘the world should be full of Josh Bennett’s,’ and I couldn’t agree more with that statement. If everyone’s first love was like this, no one would have a second love.

I want one night with Josh Bennett #becausecuddles

Easy is a combo of both types of men on this list. He’s just going to melt everything, and there’s not a damn thing you can do about it. This man was tugging at my heartstrings before I even made it to his book. The Wild Aces series by Chanel Cleeton was phenomenal, and it was hard top pick just one book for this list, but I’m confident that On Broken Wings was the right choice. This man chased the love of his life with the same fervor he’d chased skirts, and I adored every heart-stopping moment.

I want one night with Easy #allthefeels

This post was so hard to put together. It’s not easy picking the best of the best, and I could have gone on and on, but a gal has to draw the line somewhere. (I drew it at Braden Carmichael and Brian Ross; trust me, it nearly killed me.)

I would love to know who some of your favorites are!

However you’re spending this Valentine’s Day, I wish you lots of love and chocolate.