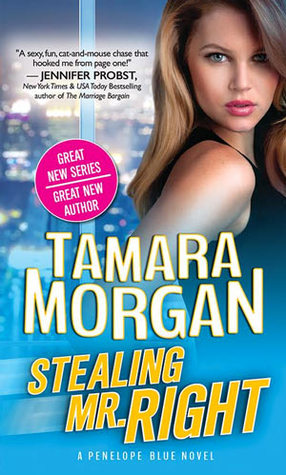 Being married to a federal agent certainly has its perks.

1. I just love the way that man looks in a suit.
2. This way I always know what the enemy is up to.

Spending my days lifting jewels and my nights tracking the Bureau should have been a genius plan. But the closer I get to Grant Emerson, the more dangerous this feels. With two million dollars’ worth of diamonds on the line, I can’t afford to fall for my own husband.

It turns out that the only thing worse than having a mortal enemy is being married to one. Because in our game of theft and seduction, only one of us will come out on top.

Good thing a cat burglar always lands on her feet.

Based on the cover and blurb of Stealing Mr. Right, I was sure I was in for a light, fun cat and mouse read. I was right about the fun part, and some of it was also light, but there was a depth to this story, and to Penelope, that I wasn’t expecting. This story hops back and forth between the past and the present, from Penelope and Grant’s ‘courtship’ to the chips finally falling where they may in the present. Penelope and Grant have chemistry off the charts. There was very little sex in this (which was a bit disappointing after all the build up in Penelope’s head; I wanted  full-on Grant sexy time,) but there is just so much tension when they’re on the page together. What I find most odd about this story is that despite feeling detached from the characters, I was still riveted. And I think it’s because Penelope tried so hard to not get attached to people, it was easy to put myself in her shoes and adopt her feeling of detachment. I’m not sure if this was deliberate on the author’s part, but it was brilliant either way. I will say, from almost the very beginning, it was clear to me how much Grant adored Penelope, and it made me sad that she was so busy waiting for him to abandon her that she couldn’t see it. Grant was just so charming and tender, but Penelope was convinced he was all bluster. And they were absolutely adorable together, which is hilarious, because neither personality screams adorable.

Penelope friends were such a wonderful addition to the story, from Jordan, her loyal gal pal, to Oz, a jack of all trades, and Riker (who I’m not sure how to describe, because he has a bit of a big brother feel, but they have…history, so that doesn’t quite work,) she had a family she’d made who had her back even if she couldn’t see it. I loved them all, and I am hoping there will be plenty of them to read about in future installments. Grant’s mother, giving Penelope a run for her money, was a hoot – like mother, like son. And props to the author, because there was a twist near the end of the book that I wasn’t expecting.

I was pleasantly surprised by Stealing Mr. Right, and I can’t recommend it enough. I’m so excited for the next one in the series! If you’re looking for a quick read with a bit of depth and a lot of fun, this is right up your alley.

Don’t miss out on your chance to win a copy of Stealing Mr. Right! Click here to go to the giveaway post! 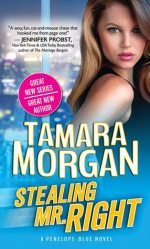 Whoever said confronting your fears head-on is the best way to get over them obviously never had to spend eight hours wedged inside an air duct.

I’m pretty sure Grant’s part in our marriage is what’s known as deep undercover.

Grant wasn’t dressed for work this time, the dark suit having been replaced by worn jeans and a tight long-sleeved T-shirt that did amazing things for his pectoral muscles. He was also growing some weekend stubble, indulging in a scrape of golden hair along his chiseled jaw.

More than anything else in that moment, I wanted to rub myself on that stubble like a cat. I wanted to feel it abrade my skin until I was raw and clean and new again.

Happily, I refrained from that, too—but it was a close call. I would have to seriously watch myself around this man.

“You can’t prove a thing,” I said quickly. “I swallowed the evidence.”

His eyes deepened in color until they were almost black. “Now that’s something I like to hear.”

See, Grant wasn’t interested in me as a person. Oh, I think he liked flirting with me, and I was sure it suited his masculine pride to know that all he had to do was smile and touch my lips to make my insides turn to mush, but other than that? I was a conduit, a source of information. Nothing more.

He wanted my dad’s fortune, not me. No one ever wanted me.

…he took two massive strides and pulled me out of my chair, holding me so close, our chests bumped and tingled. Well, his bumped; mine tingled.

Grant is my enemy, my foe, and I’ve always known that our life together has an expiration date. It’s the only reason I’ve been able to stay married as long as I have. Knowing he’s going to leave, knowing he’s only on loan to me until life inevitably rips him away, is all that’s saved me from losing my head and my heart.

“You’re meeting your FBI boyfriend at the place where we regularly conduct business? How nice. Would you also like to give him a list of the crimes you’ve committed in the past year?”

“I’m ninety-nine percent sure he already knows,” I said.

“You know, one of these days, someone is finally going to take some of the wind out of your enormous, billowing sails. All I can say is that I really hope I’m there when it happens.”

His hand caught mine and held it. “Believe me, Penelope—you already were.”