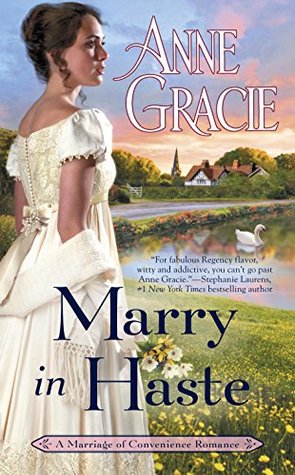 Major Calbourne Rutherford returns to England on the trail of an assassin, only to find he’s become Lord Ashendon, with the responsibility for vast estates and dependent relatives. Cal can command the toughest of men, but his wild half-sisters are quite another matter. They might just be his undoing.

When he discovers that Miss Emmaline Westwood, the girls’ former teacher, guides them with ease, Cal offers her a marriage of convenience. But strong-minded and independent Emm is neither as compliant nor as proper as he expected, and Cal finds himself most inconveniently seduced by his convenient wife.

Emm knows they didn’t marry for love, yet beneath her husband’s austere facade, she catches glimpses of a man who takes her breath away. As pride, duty and passion clash, will these two stubborn hearts find more than they ever dreamed of?

I fell in love with Anne Gracie’s writing when I read her Chance Sisters series, and the one thing that struck me when I read her newest offering, Marry in Haste, was her unique way of bringing people together in her stories and creating a family. Cal’s attempts to catch an assassin bring him back to England and the remnants of the family he left behind. Things are a little tense as his younger sisters refuse to obey his rules, so he promptly decides they need someone who can keep them in line, and this is where he gets the bright idea of proposing marriage to one of their former teachers. Emmaline has always dreamed of having a family of her own but never thought it would happen for her, so she takes Cal up on his offer. Cal is thrilled, because the sooner he can get the girls in line, the sooner he can resume tracking the assassin. I adored Cal’s relationship with his aunt. He was so loyal to her and wanted to make sure she was taken care of. And I thought it was very sad that Cal was in such hot pursuit of the man who had killed his friend but couldn’t see how much the family right in front of him needed him. And it wasn’t until Emmaline stepped in that to show him that he was able to see. While I enjoyed Cal and Emmaline’s story (it was a slow burn, which is what I love,) I liked the familial aspect even more. The way Cal, Emmaline, and his sisters found their way together was so sweet. I’m excited to read more from this series, as Cal’s sisters and niece are a colorful trio!