Today kicks off a new semi-regular feature with my buddy blogger, Birdie Bookworm. It’s so much more fun to read fantasy books with a buddy. It feels like there is so much to discuss when worlds are (sort of) built from scratch. Luckily, Birdie is humoring me by joining in, and with the list of books we’re brainstorming for future features, we’ll be set for a while! After every series, we’ll be switching who picks. so we’ll both get to whittle down our to be read lists and have a friend to gush or rant with.

Shadow and Bone is the series we’re starting with, and this was a fantastic start for us! If you want to read our thoughts on the first book in the series by the same name, keep reading! But please keep in mind that as this is a discussion post, there ARE spoilers ahead! And don’t forget to read to the end, and then click on the link to Birdie’s post so you can read the second half of our discussion!

Surrounded by enemies, the once-great nation of Ravka has been torn in two by the Shadow Fold, a swath of near impenetrable darkness crawling with monsters who feast on human flesh. Now its fate may rest on the shoulders of one lonely refugee.

Alina Starkov has never been good at anything. But when her regiment is attacked on the Fold and her best friend is brutally injured, Alina reveals a dormant power that saves his life—a power that could be the key to setting her war-ravaged country free. Wrenched from everything she knows, Alina is whisked away to the royal court to be trained as a member of the Grisha, the magical elite led by the mysterious Darkling.

Yet nothing in this lavish world is what it seems. With darkness looming and an entire kingdom depending on her untamed power, Alina will have to confront the secrets of the Grisha . . . and the secrets of her heart.

Since we plan for this to be a semi-regular feature and most of our to be read list consists of YA Fantasy, let’s start off by sharing what we have for YA Fantasy reading background.

Birdie Bookworm: I’ve read quite a few YA Fantasy series. A few Adult Fantasy too. It’s one of my favorite genres. In YA Fantasy, my favorites are Lumatere Chronicles and Seven Realms. Oh, and I loved Leigh Bardugo’s Six of Crows duology. Yes, I did it backwards.

Birdie Bookworm: I agree. I wasn’t blown away by the world building either. I didn’t think it was bad, in fact I think it was solid for the first book. I did like getting more of a glimpse into the Grisha world, especially the little palace.

Angie: Yes, Alina’s time in the palace was the highlight of the book for me.

I had a hard time believing The Darkling would be given a position of such high esteem with a jealous king – and that anyone would. What did you think of that? Was it realistic?

Angie: The more I read, the more I was surprised the king gave The Darkling so much power. I wasn’t surprised when he sort-of conquered the kingdom and his plans started to be hatched.

Birdie Bookworm: I think that if the King was born with a Grisha ability he would have happily chosen not to work with powerful Grisha. Unfortunately I think he realized he didn’t have much choice, as they’re the reason his kingdom remained so powerful. I think it was something he had to deal with. Plus, that was the way of their kingdom for centuries.

Angie: I agree. I just don’t see him putting someone so all-powerful in a position to be able to take him out. Especially since The Darkling was the only one who had his power. I picture him being more strategic and putting someone not quite so strong in that position.

Birdie Bookworm: Maybe, but then King Arthur had Merlin. I think advisers of the mystical type are usually powerful. I just think it was more a matter of not expecting anything would happen. Until Alina, The Darkling towed the line.

Birdie Bookworm: No, he was trustworthy. I just meant that those positions are usually head by powerful people. And they’re trustworthy… until they’re not, haha.

Angie: Ah. OK. I couldn’t remember. I was more taken with Lancelot and Guinevere.

Angie: I have no idea, and I am not sure it’s going to be pertinent to the story, but now I’m excited to find out! That was something I hadn’t even thought of.

Birdie Bookworm: You think? Maybe it won’t be, but there was this moment when Baghra said that people don’t even remember his actual name, and it jumped out at me as important. Prior to that comment I hadn’t even thought of him having an actual name.

Angie: You know, I didn’t think of that, either. And I am not sure how to picture him. I see him as Zorro with his black cape always covering the lower half of his face!

Birdie Bookworm: Right, me too. He’s so mysterious, and I feel like that line didn’t need to be added unless it was important foreshadowing.

Angie: No, not at this point. Whatever happens, he’s always going to be a shady character to me. I may come to love him more, and he is definitely intriguing, but I’ll never trust him or find him redeemable. But I’d be happy to be proved wrong!

Birdie Bookworm: Again, I thought there was a little bit of foreshadowing, like maybe down the road we’re going to find out something about him that will maybe change our opinion slightly. There was just something about the way he interacted with Alina.

Angie: I think it will be all for tricks! He may have feelings for Alina, but I don’t think it’ll ever trump his desire for power. And I don’t want them to. At this point, I’m shipping Malina pretty hard!

This wraps up the first half of our discussion! Don’t forget to head on over to Birdie Bookworm and check out the second half where we talk some more about The Darkling, one of our favorite characters, and where we hope Alina ends up! And don’t forget to check back for our discussion of the next book in the Shadow and Bone series in a few weeks! 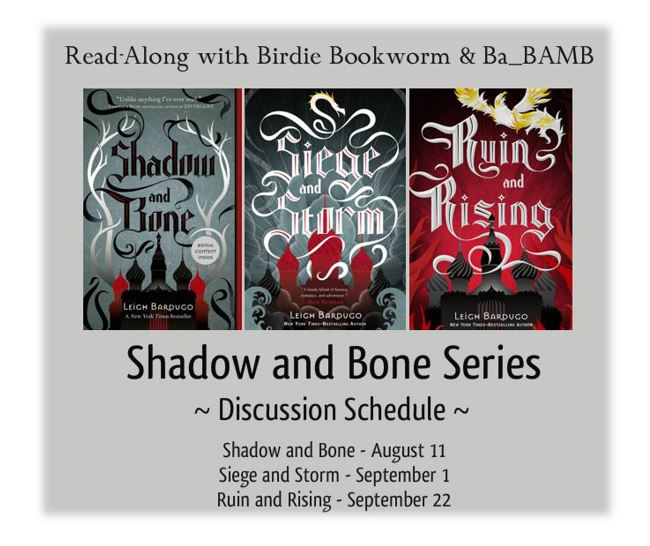