The rules of the game don’t apply off the field in this first Barons novel.

New York Barons tight end Gavin Brawley is suspended from the team and on house arrest after a video of him brawling goes viral. Gavin already has a reputation as a jerk with a temper on and off the field—which doesn’t help him once he finds himself on the wrong side of the law. And while he’s been successful professionally, he’s never been lucky when it comes to love.

Noah Monroe is a recent college grad looking for a job—any job—to pay off his mounting student debt. Working as Gavin’s personal assistant/babysitter seems like easy money. But Noah isn’t prepared for the electrifying tension between him and the football player. He’s not sure if he’d rather argue with Gavin or tackle him to the floor. But both men know the score, and neither is sure what will happen once Gavin’s timeout is over…

Oh, man. Santino Hassell reviews are always harder to write, because when I read one of his books, it’s full steam ahead. I read this one in one sitting, and I did not stop to take notes! So from my memory…I really enjoyed Noah and Gavin’s story, particularly how the author took the insubordinate employee trope (one of my least favorites,) and turned it on its head so the employer was the more unruly of the two. Though it’s clear from the very start that Gavin has a soft side. Illegal Contact kicks off with Noah interviewing for a position he doesn’t feel qualified for, and he’s not even sure he wants it. Things don’t go well, and saying he’s surprised to get a job offer is an understatement. As he’s in debt and helping to take care of his father, he accepts the job. It quickly becomes clear that Noah and Gavin have chemistry, but if there’s one thing Noah’s gun shy about, it’s getting involved with his boss. I really liked Noah’s character. I thought he was very endearing, and his being in limbo after college was a realistic portrayal of what it’s like for a lot of people. But I also like that he was determined, knew where he wanted to end up, and was going to do what he had to to make it happen. His job for Gavin was just a necessary stepping stone for him right this second. Gavin was so gruff from the very beginning, and while I’d like to say it took a while for him to win me over, I liked his character immediately. I wanted to know what was beneath all those muscles and edges. Noah was able to peel back those layers, but this was a slow burn, and it was something that took him some time. I’ve come to expect stellar characterization from this author, and he definitely delivered. His trademark steam can also be found in these pages – Noah and Gavin were so hot together! This book got off to a bit of a slow start, but when it took off, it really took off and like I said earlier, I read it in one sitting, so… I loved the secondary characters in this book, and I was left wanting more of them. Luckily that’s on its way!

Overall I thought Illegal Contact was a great read, and if you’re a fan of Santino Hassell or male/male romance, it’s not to be missed! 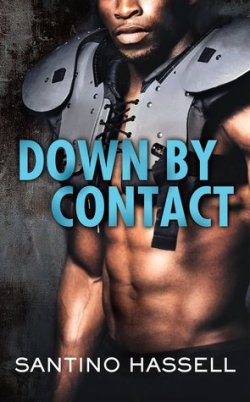