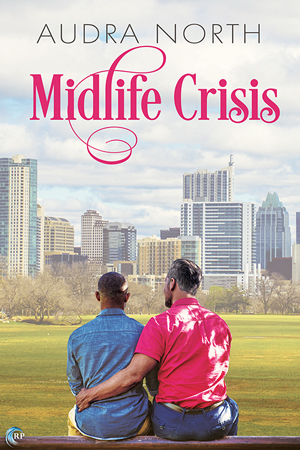 Cam McGhee grew up like any other small-town Texas farm boy: he played football, went to church every Sunday, and married his high school sweetheart. But thirty-five years after he said “I do,” Cam finds himself nursing a beer in a gay bar, thinking about what might have been.

Dave Montoya is confident, self-assured, and cautiously single. But when he meets shy, uncertain, and clearly-still-not-out Cam in a coffee shop in Austin, his reservations about getting seriously involved again disappear. Cam is everything he’s looking for in a partner . . . almost, anyway.

No matter how much Dave wants him, and how good they are together, Cam can’t bring himself to fully embrace the life he was meant to live. After all, when his secret finally gets out, he faces the very real possibility of losing everything that kept him going for the first fifty years of his life, just like he’s feared for so long. But with a little faith—and a lot of love—his dream of living fully, truly, as himself might finally be within reach.

I read another review for this book on Goodreads, and the reviewer mentioned how this was the kind of book she felt guilty for not liking more; I feel exactly the same. I wanted to like Midlife Crisis so much, and I feel like there were some good elements. But they were strung together with some less than mediocre ones, and the whole story just didn’t mesh well. So Cam is a widower who spent thirty-five years married to a woman when he was really attracted to men, and upon his wife’s death, he decides it’s time to pursue his desire to be with a man. Here’s my issue with this book – I was never able to connect with or really like Cam, and I attribute this to the flashbacks in the story. I don’t care how Cam fell in love with the wife he lived a sort-of lie with. (I hesitate to call this an outright lie, because while Cam may not have been in love with his wife, there’s no doubt in my mind he was devoted to her and their children.) I think that because of the way she appeared to be very fragile I was supposed to think he was such a kind person for sticking it out with her and taking care of her, but come on. I don’t want to read about a character that’s already dead. As a result, the story felt so disjointed. There was also an election scene featuring the first time former President Obama was elected, and while I have no doubt that this was a momentous event in Cam’s life, I’m very confused about where it falls within the context of this story. The highlight for me was Dave, and I think the book suffered for not having his POV. It would have been much more beneficial to the overall progression of the story to get Dave’s perspective than the flashbacks that did nothing for the pacing, and it could have given their relationship much more depth. Because while I liked them both, this book was pretty much instalove with as few present day words we got. It’s clear to see that overall, this book was a miss for me. I do think there was a lot of potential here, and I haven’t written this author off. She has some good ideas. I’d just like to see her execution be more focused on the main story.