This discussion round introduced Birdie Bookworm and me to the magic of Caraval. We were so excited to read this book, and we weren’t disappointed! For me, Caraval was a combination of The Wizard of Oz and Alice in Wonderland, and it was so fun getting lost in this world! As always with our discussion posts, we’ve broken it into two parts. The first part is here on my blog, and the second part can be found on Birdie Bookworm. We dive right into our thoughts below. Please be advised that since this is a discussion post, there will be spoilers. 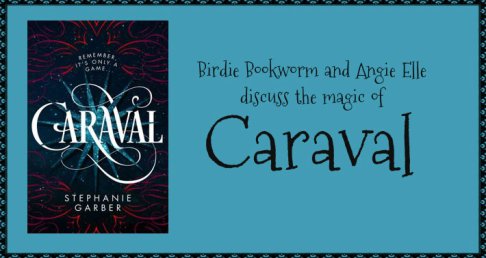 Angie Elle: So many times. I would have to stop and tell myself that it wasn’t all real. But I didn’t believe me. The problem was, it was impossible to know what was and wasn’t, because we really didn’t have all the rules of Caraval. Or if we did, there were a lot of loopholes!

Birdie Bookworm: No, actually. I think the only reason that I wasn’t swept away is because I was more into the mystery of it. Everything was a clue to me. I looked at every actor and interaction as an opportunity to glean bits of truth.

Angie Elle: That’s funny, because I agree with what you’re saying. And it was the mystery I got swept up in!

What did you think about the world building in Caraval?

Angie Elle: I thought the world building was perfect. I feel like we were given just enough description to make things vivid, but enough leeway from the author to fill in some of the blanks ourselves. I love it when that happens. It makes me feel like the world is mine, too. And I think this book was a pretty much 50/50 split between being plot driven and character driven, so it was good that neither was overwhelming.

Birdie Bookworm: I loved the world building too! I especially loved that it was fantasy, but it felt historical. Like a blend of the two. I also liked that the world building wasn’t really spent on the world, but more on the history and grandness of Caraval. I think that was the strength, and it set the story apart.

What was your favorite relationship throughout the story?

Angie Elle: Scarlett and Julian, which surprised me. I thought for sure I was going to be drawn to Scarlett and Donatella’s relationship most. I love that everything that Scarlett’s father did to the girls hadn’t hardened Scarlett too much. She still maintained a bit of naivete, and I liked that about her. I think it would have been so easy for her to go the other way, and also more typical. This route was more enjoyable for me to read, and it made the connections Scarlett was able to make credible.

Birdie Bookworm: I think Scarlett was on her way to being more cynical. She was saved just in time. I agree with you, Scarlett and Julian were the best relationship. I could have been more interested in Tella, but she was pulled out of the story so quickly. I was left with seeing more of Scarlett’s feelings for Tella, and very little from Tella, which was on purpose I believe.

Angie Elle: I didn’t feel like Scarlett was turning cynical. At the beginning, when she was talking about her Count, she was so hopeful and idealistic that he was going to whisk she and her sister away from their father and dreadful island.

Yes, Tella was pulled out of the story quickly, and maybe that’s why I didn’t feel as invested in their relationship.

Birdie Bookworm: I think cynical was the wrong word. She was ready to set aside her dreams though. She was giving in for the possibility of escape, which I get. I’m just glad she was saved from it.

Angie: Oh, man. This is the perfect example of two people reading the same book, but different. LOL I don’t feel like she was giving up her dream at all. I feel like the Count was her dream.

There was a lot going on here, and so many possible roads this story could have taken. Did you have any theories about how Caraval would end?

Angie Elle: I had so many theories! And while a few of them did pan out, it wasn’t like I was so good at figuring things out. Because I had tons of them. Odds are, one of them had to be right! I was surprised many many times throughout this story.

Birdie Bookworm: All I did was theorize! I had hundreds too. I was sure I knew who Legend was. I was sure I knew Julian’s secrets. I was positive who the true villain would be. Then, halfway through, I would start thinking the opposite. I got everything wrong. I’m usually pretty good at theorizing, but I was off base with every one of my guesses.

Caraval was originally marketed as a stand alone novel, but it was eventually announced there would be a sequel. Do you think the story has anywhere to go from here? And do you think Donatella will be able to carry an entire novel?

Angie Elle: I do think there are so many places this story could go. I was not a Donatella fan in this one, but I hope that changes in the next book. But based on the epilogue in Caraval, I think her ‘hero’ will definitely be able to carry the story even if her character doesn’t grow on me. And also – an appearance from the mother???!??! Another one of the many theories I had, but so little knowledge gained on this part of the story. I have to know what is going on there!

Birdie Bookworm: I think Caraval could have stayed a standalone, and I would have been okay with it. I know there were threads left open, but it didn’t actually bother me. I think a small part of me worries that a sequel isn’t necessary and will detract from the story, however I am excited about Tella’s hero too. I think that will be what carries the story.

Angie Elle: I think Caraval could have stayed a stand alone as well, provided the author had done away with the epilogue. And I would have been satisfied. In regards to the epilogue, I find it frustrating when the author tries to hook you into the next book via the epilogue of the previous, and that’s what was done here. That’s so frustrating to me. I want to make the choice of whether or not to continue with the series based on the author’s performance with this book. And I think this book was able to stand on its own and intrigue me enough to pick up the second.

I don’t want to feel roped into reading the next one when it feels so intentional on the author’s part. Subtlety, yo.

Birdie Bookworm: LOL! I may have even liked the epilogue if the it had ended just after the dance. With that air of mystery. Oh well, it is what it is.

Overall thoughts: The reviews for this book were so hot and cold that I was nervous to read it. As it turned out, I had nothing to worry about. Caraval was as much of a magical experience for the reader as it was for the participants, and it ended up being a four star read for me. I am so thrilled to find out we’ll be spending more time in this world. If you’ve read Caraval and want to share your thoughts, I’d love to read them in the comments below. And if our discussion made you want to pick it up, we’d love to hear that, too!

Don’t miss out on the second half of our discussion on Birdie’s blog! 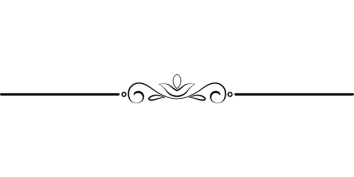 Remember, it’s only a game…

Scarlett Dragna has never left the tiny island where she and her sister, Tella, live with their powerful, and cruel, father. Now Scarlett’s father has arranged a marriage for her, and Scarlett thinks her dreams of seeing Caraval—the faraway, once-a-year performance where the audience participates in the show—are over.

But this year, Scarlett’s long-dreamt-of invitation finally arrives. With the help of a mysterious sailor, Tella whisks Scarlett away to the show. Only, as soon as they arrive, Tella is kidnapped by Caraval’s mastermind organizer, Legend. It turns out that this season’s Caraval revolves around Tella, and whoever finds her first is the winner.

Scarlett has been told that everything that happens during Caraval is only an elaborate performance. Nevertheless she becomes enmeshed in a game of love, heartbreak, and magic. And whether Caraval is real or not, Scarlett must find Tella before the five nights of the game are over or a dangerous domino effect of consequences will be set off, and her beloved sister will disappear forever.

Welcome, welcome to Caraval…beware of getting swept too far away.