If you’ve read my reviews for the first two books in Jenn McKinlay’s Bluff Point series, then you know I adore the focus of these books – fun, friendship, and finding love. Now as much as I love my romance, it’s the friendships in these books that have really stolen my heart. These friends are loyal to the core, and there is no hesitation in setting the others straight when they need it. Every Dog Has His Day is Jenn’s latest offering about this group of friends, and to celebrate its release, Jenn has shared a childhood story about how she went about putting her own band of friends together. But just a warning, if you have spent years trying to put the whole Underoos trend behind you like I have, it will rear its ugly head here. 😉

When I was nine years old, my family moved across the state of Connecticut from the mountains of my childhood to the shore of Long Island Sound. The carefully constructed relationships I had created from Kindergarten through third grade had to be abandoned. I was starting over whether I liked it or not — I liked it not.

At my previous school my hardcore tomboyishness was accepted, likely because when my ability to play with the boys was questioned I shellacked Jason D with a right hook that bloodied his nose – thank you, big brother, who taught me to defend myself — and made me the alpha girl of the first grade. When I moved, I was older and had learned that punching bullies was a major no-no. Pity.

My efforts to assimilate were a catastrophic failure. Since the girls in this new town were so very girly, I ditched my jeans and tried to wear dresses to fit in. This lasted right up until the chair I was sitting on, tipping it back on two legs while pretending I was horseback riding, went out from under me and my dress flew up around my head, temporarily blinding me and giving the entire class a looksee at my Wonder Woman Underoos. Good times!

Thus, the first few months of school were a misery as I tried desperately to find a friend. I was mystified by the rejection of the cool kids, since I’d clearly been one of the “in” crowders at my old school. Now I was just the lowly “new kid”. I quickly became tired of the hierarchy of mean — you know, when you’re in one day but out the next at the whim of the others in the pack – and I decided I would find my own squad.

In every single class, I sought out the kid or two who sat alone, quietly in the back, doodling in their notebook or surreptitiously reading a non-class book. Usually, they were just too shy to approach anyone so when the “new kid” came at them, they were equal parts terrified and curious. It took some doing but in a few weeks I staked out a lunch table for me and my new friends and it was soon full to bursting, spilling over to the table next to it as needed. No one was turned away. No one was rejected. And I had a new pack of bright, funny, good-hearted kids to pal around with at lunch and after school.

I haven’t thought about that move or how it shaped me in years. In fact, I don’t know that I really understood it at the time. It was more a matter of survival of the fittest – find someone who needs a friend and be their friend. Looking back, it taught me how to approach others in friendship, how to form a squad, and how to maintain this ragtag group of people who were used to flying solo. Does it feel like there’s a novel in there? Yes, I suppose it does. Since every book I’ve ever written centers around friendship, I’m pretty sure that growth experience has formed the basis of my writing.

The lesson I learned as a kid, I carried forward in life. New job? Find the other new hires and bond. New neighbor? Invite them to dinner. Stuck on jury duty? Commiserate with fellow jurors about the lousy coffee until commonalities emerge and friendships are formed. Writing a mystery or a romance? It’s all about the hero/heroine and their crew.

Now while I do have a lot of people I enjoy in my life, including online, there is a top tier where the select few reside. These are the friends that I laugh the hardest with because the shenanigans abound when we are together much like the characters in my books. These are the very best of the best, the friends who will hold your hair out of the bowl if you’re throwing up, the ones who will help you TP your ex’s house after a bad breakup, the ones who will show up with bail money no questions asked, and the ones you depend upon when you say, “Hey, I have a really stupid idea” to say, “Right on, let’s do it!”

I’m not saying that I’ve done any of these things, but I’m not not saying it, either. So, if you’re looking for a squad of your own, come read the Bluff Point series, all friends and their furry buddies are welcome! 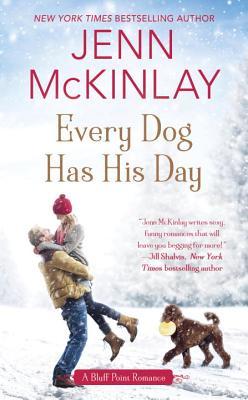 A stray kitten and a rambunctious poodle bring together a small-town bachelor and a single mother in the latest romance set in Bluff Point, Maine.

Bluff Point brewery owner Zachary Caine wants nothing to do with commitment. His wild bachelor lifestyle suits him perfectly—until a foster kitten named Chaos makes him a reluctant hero. Now he’s BFFs with the kitten’s two little girls and finds himself falling for their gorgeous mother, who couldn’t think less of him.

Divorced mother Jessie Connelly wants nothing to do with men like Zach. He’s sexy and charismatic and bad news, just like her ex. But her girls adore him, and he’s doing a good job filling in for their deadbeat dad. Then a snowstorm brings out the best in both neighbors, who, it turns out, have more in common than their mutual attraction…

So when Jessie’s past threatens her and her girls, Zach is determined to do whatever it takes to protect them—and live happily ever after with this family he has made his own.