Down by Contact by Santino Hassell | The Barons #2
Sports/Contemporary Romance, LGBTQIA
Publication Date | January 16th, 2018
ARC from Netgalley and Berkley

Simeon Boudreaux, the New York Barons’ golden-armed quarterback, is blessed with irresistible New Orleans charm and a face to melt your mama’s heart. He’s universally adored by fans and the media. Coming out as gay in solidarity with his teammate hasn’t harmed his reputation in the least—except for some social media taunting from rival linebacker Adrián Bravo.

Though they were once teammates, Adrián views Simeon as a traitor and the number-one name on the New Jersey Predators’ shit list. When animosity between the two NFL players reaches a boiling point on the field, culminating in a dirty fist fight, they’re both benched for six games and sentenced to joint community service teaching sullen, Brooklyn teens how to play ball.

At first, they can barely stand to be in the same room, but running the camp forces them to shape up. With no choice but to work together, Simeon realizes Adrián is more than his alpha-jerk persona, and Adrián begins to question why he’s always had such strong feelings for the gorgeous QB…

Down by Contact by Santino Hassell is the second book in his Barons series, but have no fear. If you haven’t read the first book and want to jump in here, you’ll be able to do so with no problem. But you may want to set some time aside. Trust me – once you’re done, you’ll want to go back and read Illegal Contact.

I was nervous, you guys. 33% into this book, and I wasn’t sure how to feel about it. It was middle of the road, and when you’re used to an author pushing the envelope, mediocre just doesn’t cut it. But I’m glad to say that once 50% hit, we were off. Simeon and Adrián had serious chemistry, and I loved watching them fight it. Even better was watching them not fight it. I thought it was interesting that the underlying factor for Adrián’s hostility was, essentially, Simeon leaving him behind; more interesting was that Adrián never took the time to analyze it. There is a lot of hostility between these two men, and it leads to a lot of heat, on the field and off. But when things get too heated on the field, Simeon and Adrián find themselves not only in hot water, but doing community service together. I really enjoyed this aspect of the story. It made you realize how good these men were, and it highlighted how they communicated very differently. I like the idea that they were out there trying to make a difference in a community that needed help, even if they were forced into it. It might have been begrudgingly at first, but it was clear they came to enjoy what they were doing. I also liked that this wasn’t necessarily chemistry realized on both sides; it took time for them to realize there might be more to their adversity than dislike. I wouldn’t call it a slow burn story, but it definitely wasn’t insta-love. And the sex scenes in this book – WOW. That’s when the book really turned around for me. It was so hot, and once it started, no matter what else was going on, it never let up.

I did have a few issues with this book. (Highlight for spoilers.) Simeon was justifiably angry with Adrián’s homophobia, but I’m not a huge fan of the whole ‘I’ll show him by seducing him’ storyline. Two wrongs don’t make a right, and Simeon’s motivations just didn’t endear him to me and made me feel like the Simeon I’d come to adore in Illegal Contact wasn’t necessarily this Simeon. Also, there were two instances when Adrián was shown to be pretty freaking stupid, and I didn’t find that indicative of his character at all. The first was not realizing that what how he was treating Simeon was sexual harassment. I’m assuming the NFL has trainings just like any other organization, so for Adrián to plead ignorance didn’t wash. It would have been more believable if he had known it and was even more of a jerk that we’d originally thought. There’s no doubt in my mind the author could have written his redemption even with that. Also, there was an incident with one of the teens at the community center. I won’t go into details, but for Adrián to just be so dismissive about it didn’t feel real. The last issue I had was that it was hard for me to determine whose perspective I was reading from. I had to keep going back to see, because the way Adrián and Simeon spoke was very similar. Had this book been written in first person, I think it could have eliminated my confusion.

This book was hot as hell, and it gave us glimpses of the characters we fell in love with in Illegal Contact. It also brought us Rocky, who is a thousand times the jerk early DbC Adrián ever thought of being, and I can’t imagine he can be redeemed. But I thought that with Caleb from the Five Boroughs series, and he’s now my favorite Hassell character. That alone has me rabid for the next Barons book! Despite my issues, I enjoyed Down by Contact. It addressed serious issues like bullying and helping those who are less fortunate than you, and it was done wonderfully. Overall, I thought this book was an enjoyable read, and if you’re a fan of enemies to lovers, you’re going to love this one! 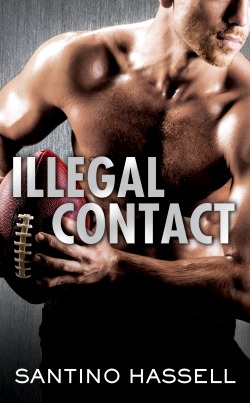 8 thoughts on “ARC Review | Down by Contact by Santino Hassell”