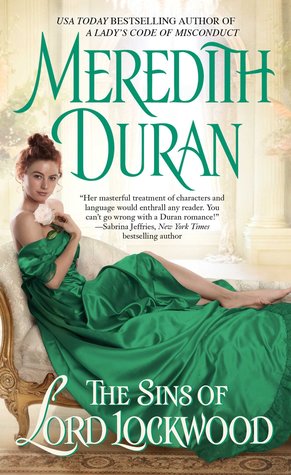 BACK FROM THE DEAD, AN EARL SEEKS VENGEANCE…

Liam Devaliant, Lord Lockwood, was born into a charmed life. Charismatic, powerful, and wild, he had the world at his feet—and one woman as his aim. His wedding to Anna was meant to be his greatest triumph. Instead, in a single moment, a wicked conspiracy robbed him of his future and freedom.

…BUT WILL HIS LONG-LOST COUNTESS PAY THE PRICE?

Four years later, Liam has returned from death with plans for revenge. Standing in his way, though, is his long-absent bride. Once, he adored Anna’s courage. Now it seems like a curse, for Anna refuses to fear or forget him. If she can’t win back Liam’s love, then she means at least to save his soul…no matter the cost.

Meredith Duran’s previous book in the Rules for the Reckless series was such a hit for me, I knew I’d be picking up her next offering. And The Sins of Lord Lockwood did not disappoint. I loved this twist on an estranged couple who actually enjoyed each other’s company before the separation and who wouldn’t have left each other willingly.

This story is given to the reader while going back and forth between the past and present, and the author does this wonderfully. I was equally invested in both timelines; when I was reading the past, I couldn’t wait to get back to the present, and I was reading the present, I wanted to be back in the past. In both instances, I was desperate to know what was next for Anna and Liam. Lockwood was so incredibly charming when they first met, and I loved that it was Anna’s spunk that drew him to her, that he saw her as a worthy adversary and admired her. He changed so much between then and ‘now,’ and I think, without those glimpses of Anna and Liam’s past, it would have been impossible for the reader to understand just how much he’d changed from who he was. The events of what happened were so ingrained in Laim that that affable aura he had was gone, and the fact that he felt he had to fake the charm he once had for Anna in an attempt to hide who he was was devastating. He didn’t realize how determined and kind he was. I also loved Anna’s character. She had a rough past, but it made her stronger, not weaker. I love resilient characters that take what they’ve learned or been through and use it be successful. Ann was a woman who as not afraid to ask for what she wanted. It was so sad to me that she had been so conditioned to behind left behind that she never gave it a second thought when Liam disappeared directly following their wedding.

This book was so sexy and flirty in parts, and the past had me grinning like a fool, which I think made Anna and Liam’s current circumstances all the more heartbreaking. I thought the pacing and the way things developed between Anna and Liam was perfect; everything seemed to happen at just the right time. The secondary characters in this book were wonderful. Liam had his colorful crew of servants, and Anna had her cousin Moira who was always a voice of reason for her and never tried to placate Anna. I loved Moira and am hoping we get her story. There were a few times when Anna felt a bit too ‘modern,’, but  overall this author took issues relevant today and applied them to the characters in a way that kept it authentic to the time period. That’s not something a lot of historical romance writers can pull off.

The Sins of Lord Lockwood was a wonderful story that had me rooting for the characters from beginning to end, and my heart hurt for the life that was stolen from them. I loved Anna and Liam separately, but there was just something about them together that was so perfect. If you’re a fan of historical romance, you’re not going to want to miss this one.

Series | Rules for the Reckless