Angel Crawford is finally starting to get used to life as a brain-eating zombie, but her problems are far from over. Her felony record is coming back to haunt her, more zombie hunters are popping up, and she’s beginning to wonder if her hunky cop-boyfriend is involved with the zombie mafia. Yeah, that’s right—the zombie mafia.

Throw in a secret lab and a lot of conspiracy, and Angel’s going to need all of her brainpower—and maybe a brain smoothie as well—in order to get through it without falling apart.

*Please be advised that this review does include spoilers for the first book in the series.

My Life as a White Trash Zombie was such a hit for me that I couldn’t wait to dive into Even White Trash Zombies Get the Blues. And what a fun read this turned out to be! It wasn’t long in between reads, but already I forgot how much fun it was being in Angel’s head. I really do love her ‘I don’t give a shit’ exterior coupled with her soft heart. And her inner dialogue is always hilarious!

Now I will get my dislikes out of the way first, as there were only a few. The first was Marcus – I feel like his character did an about face in this book. He was so supportive of Angel in the first one and really concerned about her worries. In this one, he was so dismissive and cavalier. It just doesn’t jive with the man who was so desperate for Angel to have a second chance that he turned her into a zombie, found her a job, and mentored her from afar. This felt like it served the plot more than it served the character, and I didn’t like it. My other issue was the scientific explanation for how a zombie became a zombie. This part was so long and made my eyes glaze over so much that I put the book down, and before I knew it, a few weeks went by. Obviously I picked it back up, and I really ended up enjoying it, but the biological explanation needed to be a lot shorter to keep this reader interested.

No on to the good stuff – I love the progression of Angel’s relationship with her dad in this one. I feel like it’s moving along at a realistic pace, and I love that we get to see him struggle with his recovery, and that it’s not instantaneous. There’s a good guy in there, and we get some glimpses of him in this one. The best part of this book, by far, was the action sequences. They were so well written, and I could picture everything as it was happening. I like that the author stays true to the character, and there are a lot of instances where Angel needs to improvise when she is low on strength. She can’t always activate her zombie superpowers, and the author doesn’t rely on them to get Angel out of sticky situations. Part of this book were predictable, but there were also some surprises – friends became enemies, enemies became friends, and and some even ended up dead. But no spoilers here. You’ll have to read this installment to find out.

While I didn’t love Even White Trash Zombies Get the Blues as much as I did the first installment, I did enjoy it. Marcus may have changed, but the spirit of the series hasn’t. And that’s what captured my interest at the beginning. It’s safe to say I’ll be reading the next installment! 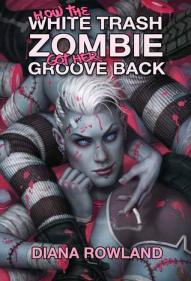