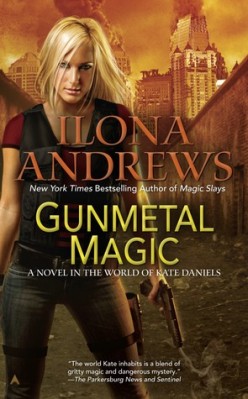 Mercenary Kate Daniels and her mate, Curran, the Beast Lord, are struggling to solve a heartbreaking crisis. Unable to control their beasts, many of the Pack’s shapeshifting children fail to survive to adulthood. While there is a medicine that can help, the secret to its making is closely guarded by the European packs, and there’s little available in Atlanta.

Kate can’t bear to watch innocents suffer, but the solution she and Curran have found threatens to be even more painful. The European shapeshifters who once outmaneuvered the Beast Lord have asked him to arbitrate a dispute—and they’ll pay him in medicine. With the young people’s survival and the Pack’s future at stake, Kate and Curran know they must accept the offer—but they have little doubt that they’re heading straight into a trap…

Going into Gunmetal Magic, I tried really hard not to compare it to Kate Daniels. Kate’s shown a tremendous amount of growth, but her character arc has had the advantage of spanning several books. To expect the same from Andrea in under 400 pages just wouldn’t be fair. In the end, I failed miserably; this book just didn’t cut it. I felt bad at first, but the fact of the matter is that Gunmetal Magic is part of the Kate Daniels series, and it has a lot to live up to if it’s going to be touted as such. I found Andrea to be whiney, wishy-washy, and the reason she and Raphael couldn’t (or in this case, wouldn’t,) find their way back together to be not only juvenile, but contrived. And was it just me, or was the makeup sex so glossed over you couldn’t see through the glare? After Raphael having such a rakish reputation and the boudas being know for being so randy, I wanted more.

Andrea is a lot more interesting at Kate’s side, being the woman who broke the shield around Kate’s heart to be one of her first girlfriends. I guess I’m saying that I liked the mystery Andrea much more than the revelation. As for Raphael, he sunk low in this book in an effort to bring out Andrea’s jealousy, and it felt out of character to me. If Raphael were to bother with Andrea after they broke up, I think he would have been more lowkey about it in an effort to maintain his pride. As for Roman, he felt like a lesser version of Saiman, and the whole thing between he and Andrea – contrived. Nothing in this book felt easy or organic for me, but what really pushed it over the top was the appearance of the person from Andrea’s past who ‘got away.’ That felt sloppy and convenient. The one highlight in this book was Ascanio. Every ounce of character growth I’ve seen from him is in this book, and it’s too bad that it’s not included in the major books in the series. But I was glad to see it at all, and I’m interested in how it will change my view of him when I return to my re-read of book eight.

No one is more saddened by this turn of events than I am. I’ve loved every installment in this series focusing on Kate and Curran and their adventures. Quite frankly, Andrea and Raphael just don’t measure up, and in the end neither did this plot.

The Narrator – While even Renée Raudman couldn’t save Gunmetal Magic, her interpretation of the characters was, as always, stellar. She has great intonation and brings the character so much life. There is no one who could narrate this series better! 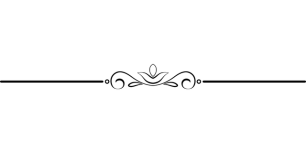