If you’ve read this book and want to discuss spoilers, please stay tuned for tomorrow’s post, in which my buddy Birdie and I discuss the heck out of this book. But for those who haven’t read it, I wanted to put a spoiler free review out there for your consideration. This was such a great start to a series, and the more people to discuss it with, the better! 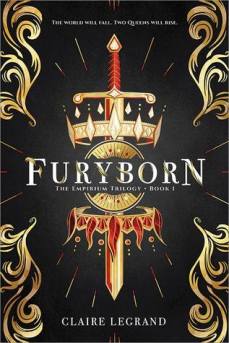 When assassins ambush her best friend, the crown prince, Rielle Dardenne risks everything to save him, exposing her ability to perform all seven kinds of elemental magic. The only people who should possess this extraordinary power are a pair of prophesied queens: a queen of light and salvation and a queen of blood and destruction. To prove she is the Sun Queen, Rielle must endure seven trials to test her magic. If she fails, she will be executed…unless the trials kill her first.

A thousand years later, the legend of Queen Rielle is a mere fairy tale to bounty hunter Eliana Ferracora. When the Undying Empire conquered her kingdom, she embraced violence to keep her family alive. Now, she believes herself untouchable–until her mother vanishes without a trace, along with countless other women in their city. To find her, Eliana joins a rebel captain on a dangerous mission and discovers that the evil at the heart of the empire is more terrible than she ever imagined.

As Rielle and Eliana fight in a cosmic war that spans millennia, their stories intersect, and the shocking connections between them ultimately determine the fate of their world–and of each other.

Furyborn was a book that was not even on my radar until Birdie Bookworm put it there, and I can’t thank her enough. I probably never would have picked this book up otherwise, and I would have really been missing out. Furyborn introduces us to the Empirium Trilogy, and it’s a solid start to what’s sure to be a stellar series. Going back and forth between past and ‘present,’ we visit characters Rielle and Eliana, and at different parts through this book, I flip-flopped between which parts I was more invested in. I  was devouring the pages so I could find out what would happen next! The pacing would have been fine otherwise, but with the alternating POVs, it was impeccable and ensured I was glued to the pages.

There were things I liked and didn’t like about Eliana and Rielle, but the fact of the matter is they were both flawed characters who made a lot of mistakes and are (hopefully) still learning from them. Simon was a standout secondary character in this book, and the world building and imagery was very well done. My only gripe with this book was I feel like the end battle was a bit lackluster and was hoping for a more action packed conclusion to this part of the story. It felt a little anti-climactic compared to the pacing of the rest of the book, and amping it up more would have made it more exciting.

While I wouldn’t necessarily compare this book to Shadow and Bone from The Grisha Trilogy, I do feel like it’s what I was looking for when I picked Shadow and Bone up. I may have rated them the same, but world building wise and character development wise, I feel like this book was more lush. I would caution a reader that while this book may be classified as Young Adult, it is a very mature Young Adult and should be read with that in mind.

Overall, I thought Furyborn was enthralling from the beginning, and I cannot wait for the next book in this series. If you’re a fan of Fantasy, YA or otherwise, this book is for you!