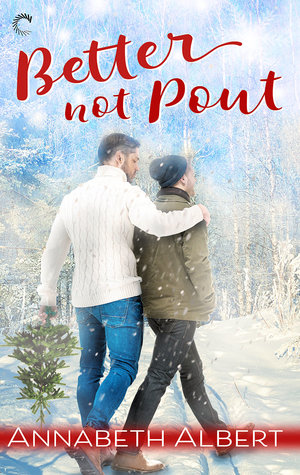 Is it a recipe for disaster? Or a once-in-a-lifetime opportunity for holiday romance?

Teddy MacNally loves Christmas and everything that goes along with it. When he plays an elf for his charity’s events, he never expects to be paired with a Scrooge masquerading as Santa Claus. His new mission: make the holiday-hating soldier believe he was born to say ho-ho-ho.

Sergeant Major Nicholas Nowicki doesn’t do Santa, but he’s army to his blood. When his CO asks an unusual favor, Nick of course obliges. The elf to his Kris Kringle? Tempting. Too tempting—Nick’s only in town for another month, and Teddy’s too young, too cheerful and too nice for a one-night stand.

The slow, sexy make-out sessions while Teddy and Nick are alone and snowbound, though, feel like anything but a quick hookup. As a stress-free holiday fling turns into Christmas all year round, Teddy can’t imagine his life without Nick. And Nick’s days on the base may be coming to a close, but he doesn’t plan on leaving anything, or anyone, behind.

When I saw the blurb for Better Not Pout, I knew it was the perfect book to kick off a season of Christmas reads. It’s clear that one of these men is a grumpy-pants, and no one writes grumpy heroes like Annabeth Albert. And when he’s offset by a happy-go-lucky man who loves to see the good in things…well, you know begrudging fun is going to ensue. Teddy’s life has been the exact opposite of Nick’s; all he’s ever known is love and joy. Even in the midst of the same kind of family tragedy experience, Teddy’s family banded together instead of falling apart like Nick’s did. This book really was the quintessential Christmas read – lonely heroes find love, but with their life paths diverging, they face obstacles in how to stay together. Of course there’s a happily ever after; Teddy so completely wraps Nick in his love that there was no other way for this to go. Their bumpy road is also hilarious – Teddy’s family is absolutely giddy at the thought of him finding happiness, and they make no bones about it. One of the things I love about Annabeth Albert’s books is that there is always a compromise; both sides always give (or try to give) something up to meet in the middle. And this book was so sweet and the happy ever after so tenuous that I got choked up. Teddy really was everything Nick ever could have wanted, but Nick wanted more (than himself, an old ‘fogie’) for Teddy. The way Teddy inspired Nick to be a better person (mostly being more outward with his feelings, as Nick was already a good guy,) was just one more way they were perfect for each other. Not to mention there was tons of Christmas going on in this books. Santa outfits, elf outfits, helping others in need, and really – have raging snowstorms ever been sexier? I don’t think so! Better Not Pout was so sweet, and if you want to curl up with a holiday read that is sure to bring on the feels, this is the one you’re looking for!

5 thoughts on “ARC Review | Better Not Pout by Annabeth Albert”