From the ARC-ives is a feature I created in an attempt to tackle those old ARCs on my TBR. Only time will tell if I fail or succeed, but with my deadline looming (OCTOBER…yeesh) I had better get my reading butt in gear! 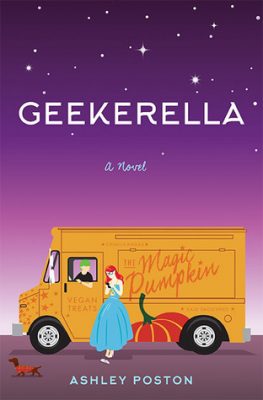 Cinderella goes to the con in this fandom-fueled twist on the classic fairy tale.

Part romance, part love letter to nerd culture, and all totally adorbs, Geekerella is a fairy tale for anyone who believes in the magic of fandom. Geek girl Elle Wittimer lives and breathes Starfield, the classic sci-fi series she grew up watching with her late father. So when she sees a cosplay contest for a new Starfieldmovie, she has to enter. The prize? An invitation to the ExcelsiCon Cosplay Ball, and a meet-and-greet with the actor slated to play Federation Prince Carmindor in the reboot. With savings from her gig at the Magic Pumpkin food truck (and her dad’s old costume), Elle’s determined to win…unless her stepsisters get there first.

Teen actor Darien Freeman used to live for cons—before he was famous. Now they’re nothing but autographs and awkward meet-and-greets. Playing Carmindor is all he’s ever wanted, but the Starfield fandom has written him off as just another dumb heartthrob. As ExcelsiCon draws near, Darien feels more and more like a fake—until he meets a girl who shows him otherwise.

Geekerella is the first book in the Once Upon a Con series, which is a series of different retellings. This one is a Cinderella-ish story that is supposedly a nod to nerd culture and fandom, but for me, the premise of this book was so much better than the execution. This book was so slow to get going; if I hadn’t been reading it for a round of Book Bingo, I probably would have put it down. It did eventually pick up, but when the main characters meet and it’s the most disastrous scene in the book (and not in a good way,) it’s never a good sign.

So this book covers the typical Cinderella story – a young woman who was incredibly close to her father left behind when he dies with a step-mother who treats her terribly and two wicked step-sisters. The fairy God-mother in this story comes in the form of Elle’s co-worker, Sage, who owns a food truck with a pumpkin painted on the side of it. Sage is Elle’s age, and quite frankly, she was the only interesting person in this book. I liked the way she and Elle became friends, so suddenly, and that she was Elle’s allie through the entire story. She was such a good friend and constantly cheering Elle on, right up until the very end in a hilarious scene with her and Darien, the love interest in this book. Speaking of Darien – the poor guy. He was such a bland character. He had no backbone, and his story was so predictable and boring. And like I mentioned earlier, the first meeting between Darien and Elle was incredibly lackluster as well. I will admit, he was being a bit rude when they first met, but I really understood his motivation and think a lot of his actions were driven by anxiety. Elle, by comparison, was just being bratty and mean-spirited, and it made a lukewarm story even worse. And what really frustrates me is that I think this was supposed to be an example of her standing up for herself. But that’s not how it felt to me. It was her being nasty, plain and simple, and it’s frustrating to me that this is how ‘strong’ females are being portrayed in YA. I also feel like this book relied heavily on the fact that Elle lost her father, and that just doesn’t instantly make a layered character. I need more than that. My last gripe is how closely this book followed the beats of Ever After, and I know, I know. They’re both Cinderella stories. But if you’re going to emulate a beloved story like this one (more so Ever After than the original,) then it should be done so much better.

I guess I’ll stop here, because I honestly feel like I’ve talked myself down another star on the rating. In summary – Sage was the shining star of Geekerella, a misunderstood loner, and I think her story could be worth reading. But I’m not sure I want to give this author another go. I guess time will tell.

Series: Once Upon a Con 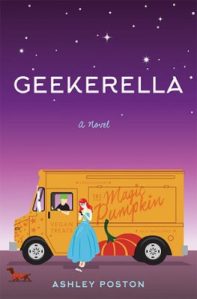 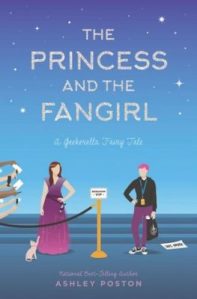 13 thoughts on “From the ARC-ives | Geekerella by Ashley Poston”