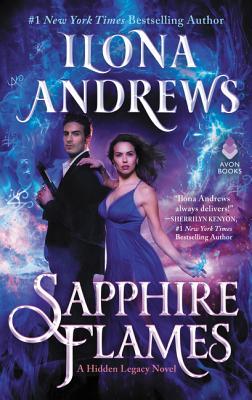 In a world where magic is the key to power and wealth, Catalina Baylor is a Prime, the highest rank of magic user, and the Head of her House. Catalina has always been afraid to use her unique powers, but when her friend’s mother and sister are murdered, Catalina risks her reputation and safety to unravel the mystery.

But behind the scenes powerful forces are at work, and one of them is Alessandro Sagredo, the Italian Prime who was once Catalina’s teenage crush. Dangerous and unpredictable, Alessandro’s true motives are unclear, but he’s drawn to Catalina like a moth to a flame.

To help her friend, Catalina must test the limits of her extraordinary powers, but doing so may cost her both her House–and her heart.

Sapphire Flames is the fourth book in Ilona Andrews’ Hidden Legacy series. If you really wanted to, you could get by without reading the first three books, but you’d be doing yourself a great disservice; they were phenomenal reads. The series takes a turn here, as we transition from one Baylor sister to another. Nevada is no longer the focus of this series (nor is she even in this book very much,) and in my opinion, Catalina just doesn’t stack up to her sister. I’m a firm believer that an author sets the bar for themselves, but that doesn’t make this review any easier to write. I was left incredibly underwhelmed with this book. There was no point where I felt so gripped that I couldn’t put the book down, and I couldn’t even point to a favorite scene if you asked me to. There was nothing striking about the story. I thought the action scenes were lackluster, and very little was given away about Alessandro. And it wasn’t in a way that left me thirsting for more; it was more in a way that it was hard for me to care about him because I didn’t feel like his character offered anything to me as the reader. Which brings me to my next point, and my biggest issue. Where was the romance here? There is no build up, no tension. From the get-go, Alessandro and Catalina are just smitten with each other. But I feel like it took place before the book even began, so I wouldn’t even call it instalove. I honestly don’t know what I’d call it. I don’t feel like Ilona Andrews’ books have ever been just about the romance, but damn do they usually knock it out of the part with it anyway. As for Catalina…she was so lost in her head most of the time, and it got old for me quick.

The thing that I did love about this story was the Baylors. They really are the backbone of this series, and I always want to know more about them. Also, there may have been a bit of a flirtation for Bern in this one, and I really want more of that! And there was a new furry addition to the Baylor’s in this one, and I loved that, too.

Look – I know I sound like a frustrated reader, and yeah. I am. But now that I know what to expect and that Catalina and Alessandro are already in love, I’m hoping the next read will be better for me. I won’t give up on this series, and even with my issues, I’m still giving Sapphire Flames three stars. The Baylors deserve at least that. 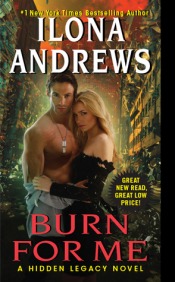 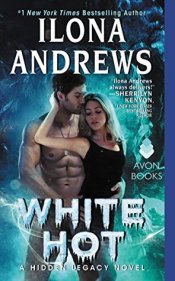 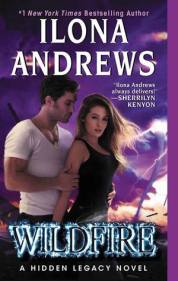 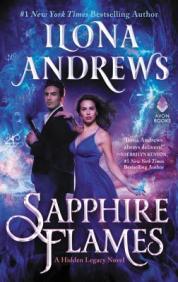 Leave a Reply to Rachel @Waves of Fiction Cancel reply