Regretting You by Colleen Hoover

From #1 New York Times bestselling author of It Ends with Us comes a poignant novel about family, first love, grief, and betrayal that will touch the hearts of both mothers and daughters.

Morgan Grant and her sixteen-year-old daughter, Clara, would like nothing more than to be nothing alike.

Morgan is determined to prevent her daughter from making the same mistakes she did. By getting pregnant and married way too young, Morgan put her own dreams on hold. Clara doesn’t want to follow in her mother’s footsteps. Her predictable mother doesn’t have a spontaneous bone in her body.

With warring personalities and conflicting goals, Morgan and Clara find it increasingly difficult to coexist. The only person who can bring peace to the household is Chris—Morgan’s husband, Clara’s father, and the family anchor. But that peace is shattered when Chris is involved in a tragic and questionable accident. The heartbreaking and long-lasting consequences will reach far beyond just Morgan and Clara.

While struggling to rebuild everything that crashed around them, Morgan finds comfort in the last person she expects to, and Clara turns to the one boy she’s been forbidden to see. With each passing day, new secrets, resentment, and misunderstandings make mother and daughter fall further apart. So far apart, it might be impossible for them to ever fall back together.

I have a confession to make: Regretting You is only the second book I’ve picked up by Colleen Hoover, and I have my reasons. My only other read from her is Hopeless, and what an emotional ride it was. It made me realize that if I was going to ever pick up another book by this author, I needed to be emotionally prepared. Apparently it’s taken me years to get here, but I’m so glad I am! I adored this book so much. There were so many relationship dynamics at play here, and they meshed together into a near perfect plot. The prologue was so perfect and pulled me right into the story. I read it almost all in one sitting, and I can’t wait to reread this book via audio. (Pssst…at the time this goes live, the Whispersync is only $1.99.)

This book eases the reader in giving us a glimpse of a day in the life of the Grants just before rocking their (and our) worlds. It’s basically what happens to the Grant women in the wake of tragedy, and things weren’t pretty. There was a lot of emotional reacting going on, a lot of jumping to conclusions, and a lot of rebellion. I don’t want to go into spoilers, but I will say how well this was done. I enjoyed Morgan’s (the mom’s story,) much more than Clara’s. (The daughter.) And here’s why – Morgan’s story felt so authentic, the way she examined her past and the way it went vs. the way it could have gone without ever making you feel like she didn’t adore her daughter. For Clara, what made me like her character less, was the way her rebellion felt so deliberate and thought out. It didn’t feel as knee-jerk as I’d have expected, and while I can buy that the things she did were something someone in her emotional state would do, I feel like her actions weren’t organic.

As for the other parts of the story, their romances played out side by side, and I did enjoy them, even if Miller felt a little too perfect. Again, Morgan’s storyline was the one that intrigued me more and tugged at my heart. I thought Clara was incredibly irresponsible in her newfound relationship, and parts of that felt off to me as well.

The best part of this book was, hands down, the mother/daughter relationship. The way Morgan would do anything to protect her daughter, and the way Clara used her safe person, her mother, to always lash out at was very true to life. There was so much going on and so many poor choices on both parts, but there is so much beauty in truth and forgiveness, and the author brought us to both of those points beautifully.

The four stars is from the way Clara’s actions didn’t always feel organic, but it’s also because of the epilogue. It was a huge fail for me and just didn’t feel like it fit the rest of the book. And after the buildup of always talking about it, it was pretty anticlimactic.

Regretting You was such a beautifully written story that was so full of emotion and devastating to read at times, but it was worth every second I got to spend with these characters. If you’re a fan of Colleen Hoover or emotional stories, this book is definitely for you. If you’re a fan of both, you’re in for the ride of your life!

| Buy Regretting You on Amazon |

Despite knowing I just pissed my mother off by being half an hour late for curfew, I still can’t stop smiling. That kiss with Miller was worth it. I bring my fingers to my lips.

I’ve never been kissed like that. The guys I’ve kissed in the past all seemed like they were in a hurry, wanting to shove their tongue in my mouth before I changed my mind.

Miller was the opposite. He was so patient, yet in a chaotic way. It was like he’d thought about kissing me so often that he wanted to savor every second of it.

I don’t know that I’ll ever not smile when I think about that kiss. It kind of makes me nervous for school tomorrow. I’m not sure where that kiss leaves us, but it felt like it was a statement. I just don’t know what exactly that statement was.

My phone buzzes in my back pocket. I roll over and pull it out, then fall onto my back again. It’s a text from Miller.

Me: Is that happening now?

Miller: Yes. I don’t feel like I was entirely forthcoming with you.

I roll onto my stomach, hoping to ease the nausea that just passed through me. It was going so well…

Me: What weren’t you honest about?

Miller: I was honest. Just not entirely forthcoming, if there’s a difference. I left a lot out of our conversation that I want you to know.

Miller: Like why I’ve liked you for as long as I have.

I wait for him to elaborate, but he doesn’t. I’m staring at my phone with so much intensity that I almost throw it when it rings unexpectedly. It’s Miller’s phone number. I hesitate before answering it, because I rarely ever talk on the phone. I much prefer texting. But he knows I have my phone in my hand, so I can’t very well send it to voice mail. I swipe my finger across the screen and then roll off the bed and head to my bathroom for more privacy. I sit on the edge of the tub.

“You’re kind of freaking me out with all the innuendos.”

“Oh. No, it’s all good. Don’t be nervous. I just should have said this to you in person.” Miller inhales a deep breath, and then on the exhale, he starts talking. “When I was fifteen, I watched you in a school play. You had the lead role, and at one point, you performed a monologue that went on for like two whole minutes. You were so convincing and you looked so heartbroken I was ready to walk onto the stage and hug you. When the play was finally over and the actors came back out onto the stage, you were smiling and laughing, and there wasn’t a trace of that character left in you. I was in awe, Clara. You have this charisma about you that I don’t think you’re aware of, but it’s captivating. I was a scrawny kid as a sophomore, and even though I’m a year older than you, I hadn’t quite filled out yet, and I had acne and felt inferior to you, so I never worked up the courage to approach you. Another year went by, and I continued to admire you from afar. Like that time you ran for school treasurer and tripped walking off the stage, but you jumped up and did this weird little kick and threw your arms up in the air and made the entire audience laugh. Or that time Mark Avery popped your bra strap in the hallway, and you were so sick of him doing it that you followed him to his classroom, reached inside your hoodie, and took off your bra and then threw it at him. I remember you yelling something like, ‘If you want to touch a bra so damn bad, just keep it, you perv!’ Then you stormed out. It was epic. Everything you do is epic, Clara. Which is why I never had the courage to approach you, because an epic girl needs an equally epic guy, and I guess I’ve just never felt epic enough for you. I’ve said epic so many times in the last fifteen seconds—I’m so sorry.”

He’s out of breath when he finally stops talking.

I’m smiling so hard my cheeks ache. I had no idea he felt this way. No idea.

I wait a few seconds to make sure he’s done; then I finally respond. I’m pretty sure he can hear from my voice alone that I’m smiling. “First of all, it’s hard to believe you were ever insecure. And second, I think you’re pretty epic, too, Miller. Always have. Even when you were scrawny and had acne.”

He laughs a little. “Yeah?”

I can hear him sigh. “Glad I got that off my chest, then. See you at school tomorrow?”

We end the call, and I don’t know how long I sit and stare at my phone. 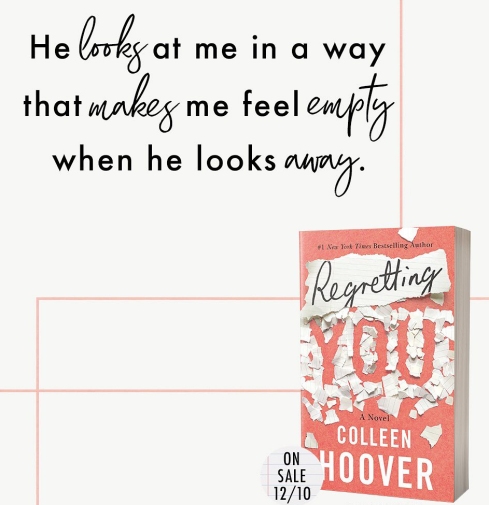 Colleen Hoover is the #1 New York Times bestselling author of several novels, including the bestselling women’s fiction novel It Ends with Us and the bestselling psychological thriller Verity. She has won the Goodreads Choice Award for Best Romance three years in a row—for Confess (2015), It Ends with Us (2016), and Without Merit (2017). Confess was adapted into a seven-episode online series. In 2015, Hoover and her family founded the Bookworm Box, a bookstore and monthly subscription service that offers signed novels donated by authors. All profits go to various charities each month to help those in need. Hoover lives in Texas with her husband and their three boys. Visit www.colleenhoover.com.

*click on the image below to be taken to the Rafflecopter giveaway. Publisher is responsible for this giveaway. 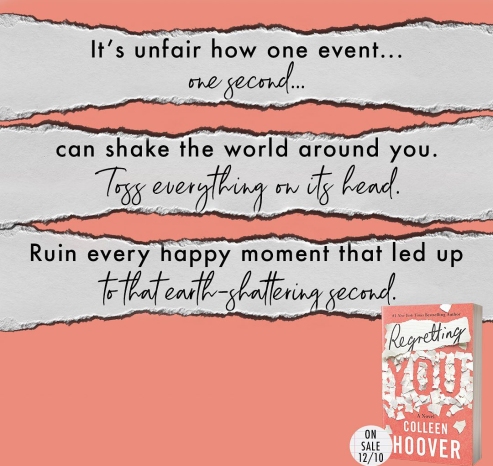