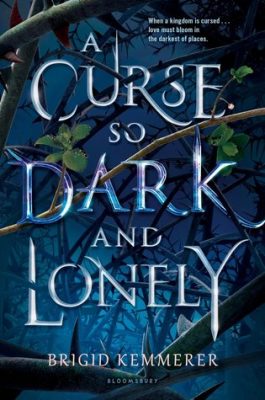 Fall in love, break the curse.

Cursed by a powerful enchantress to repeat the autumn of his eighteenth year, Prince Rhen, the heir of Emberfall, thought he could be saved easily if a girl fell for him. But that was before he turned into a vicious beast hell-bent on destruction. Before he destroyed his castle, his family, and every last shred of hope.

Nothing has ever been easy for Harper. With her father long gone, her mother dying, and her brother constantly underestimating her because of her cerebral palsy, Harper learned to be tough enough to survive. When she tries to save a stranger on the streets of Washington, DC, she’s pulled into a magical world.

Break the curse, save the kingdom.

Harper doesn’t know where she is or what to believe. A prince? A curse? A monster? As she spends time with Rhen in this enchanted land, she begins to understand what’s at stake. And as Rhen realizes Harper is not just another girl to charm, his hope comes flooding back. But powerful forces are standing against Emberfall . . . and it will take more than a broken curse to save Harper, Rhen, and his people from utter ruin.

A Curse So Dark and Lonely kicks off Brigid Kemmerer’s latest series, Cursebreakers. This particular story is a Beauty & the Beast retelling, and if there’s one fairytale I want to read over and over again, it’s this one.

Harper is on the lookout for her thug of a brother one night when she witnesses something she can’t ignore. After intervening, her life changes forever when she’s swept away into a fantastical world called Emberfall. Rhen has spent many ‘seasons’ trying and failing to find love in order to break a curse over his kingdom, and he’s lost all hope. Finding out that this is his last ‘season’ magnifies his hopelessness. Grey is his loyal protector, and there’s nothing he wouldn’t do for the crown prince. This was such a wonderfully written book. The relationship between Rhen and Grey was fantastic, and I loved the way Harper changed the dynamic of the entire kingdom. She gave both Rhen and Grey new perspectives on things, and she learned a lot from them while she was in this world. There was a lot that they all wanted to change that they couldn’t, but they always had good intentions and wanted the best for the kingdom. Harper comes to inspire both men in different ways, and I loved the way they all interacted.

This book had a slower pace to it, as I find a lot of fantasy does. But I never felt like it was wasted time or dragging; everything that happened felt pertinent to the plot. Harper had Cerebral Palsy, and I thought it was interesting how differently she was viewed in the worlds. She really found her strength in Emberfall; her tenure as acting the part of a false princess gave her a confidence she’d never had before, and as far as Rhen and Grey were concerned, it wasn’t a hindrance for her, neither should she see it as such. But in her own world, it’s clear her brother sees her as someone who can’t make it on her own and needs to be looked after.

A couple of things I realized while reading this book: #1, how much I look forward to the scene where the hero sheds his beast form that last time. It is such a momentous part of the story, and it was done splendidly here. And #2, how much I like the premise of getting swept away into a different world. I like fantasies where there’s one character who goes to another world, and they know it. It adds such an exciting element to the story, and I like to see how a character acts when they’re out of their element. It feels so fantastical, and I love it. I will say, one thing is that if you’re from this world, how can you not know you’ve been ushered into a Beauty and the Beast scenario? I’m not knocking the author for this; I’m just thinking about how much I would love a story where the heroine knows what she’s a part of.

I will say that if you read and loved this book and you haven’t read Hunted by Meagan Spooner, you should. It’s another Beauty and the Beast retelling that is wonderfully written, and it rivals this one for my favorite.

In case it’s not obvious, I loved A Curse So Dark and Lonely, and I cannot wait to read the follow up. I could kick myself for sitting on this for so long, but at least I don’t have long to wait for A Heart So Fierce and Broken after that ending!

If you have read this book or don’t mind spoilers, keep an eye out for a discussion post for this book with my reading buddy, Shanna, coming soon! We had lots to talk about. 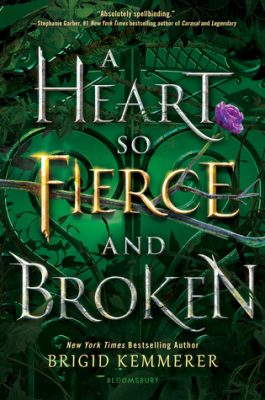 Fingers crossed I can finish my ‘extra’ to do list today! I am undecided on my purse, because I still maintain I could build up some good muscle with that thing as full as it is! I’ve been binging @the.minimal.mom recently on YouTube, and she’s inspired my 50 item purge. I don’t think I’d ever be able to fully adopt a minimalist lifestyle, but I would love to get my house less cluttered! #blogger #bookblogger #planner #getitdone #todolist #purgingfool
I've been wanting to pick up an Emma Mills book for a long time, so I was thrilled to get my hands on an early copy of Lucky Caller! Blurb: When Nina decides to take a radio broadcasting class her senior year, she expects it to be a walk in the park. Instead, it’s a complete disaster. The members of Nina's haphazardly formed radio team have approximately nothing in common. And to maximize the awkwardness her group includes Jamie, a childhood friend she'd hoped to basically avoid for the rest of her life. The show is a mess, internet rumors threaten to bring the wrath of two fandoms down on their heads, and to top it all off Nina's family is on the brink of some major upheaval. Everything feels like it's spiraling out of control―but maybe control is overrated? With the warmth, wit, intimate friendships, and heart-melting romance she brings to all her books, Emma Mills crafts a story about believing in yourself, owning your mistakes, and trusting in human connection in Lucky Caller. #ARC #YoungAdult #YA #CurrentlyReading #EmmaMills #Macmillan #BookWorm #BookBlogger #RomanceStaGram #BookStaGram #BookAddict #blogger #reader
Thank you, AVON Books & Harper Collins, for approving my ARC Request for one of my MOST ANTICIPATED READS OF THE YEAR, Chasing Cassandra by Lisa Kleypas. You have solidified my weekend reading plans! Coming soon, readers. Coming soon... Blurb: Everything has a price... Railway magnate Tom Severin is wealthy and powerful enough to satisfy any desire as soon as it arises. Anything—or anyone—is his for the asking. It should be simple to find the perfect wife—and from his first glimpse of Lady Cassandra Ravenel, he’s determined to have her. But the beautiful and quick-witted Cassandra is equally determined to marry for love—the one thing he can’t give. Everything except her... Severin is the most compelling and attractive man Cassandra has ever met, even if his heart is frozen. But she has no interest in living in the fast-paced world of a ruthless man who always plays to win. When a newfound enemy nearly destroys Cassandra’s reputation, Severin seizes the opportunity he’s been waiting for. As always, he gets what he wants—or does he? There’s one lesson Tom Severin has yet to learn from his new bride: Never underestimate a Ravenel. The chase for Cassandra’s hand may be over. But the chase for her heart has only just begun... #TheRavenels #AVONBooks #HarperCollins #LisaKleypas #Bookstagrammer #Bookworm #Romancestagram #HistoricalRomance #Romance #ARC #MostAnticipated #blogger #BookBlogger #BookAddict #02182020
#afterpic What a difference a day makes! Now that our hygiene issues have been addressed, we can get back to out regularly scheduled programming. It always takes me a few weeks to get used to my teeny tiny kitty cat once she’s been shaved. #cat #catsofinstagram #pets #petsofinstagram #blogger #bookblogger #catmom #mainecoon #catstagram #petstagram
I do love a cat with a plan. I just hope she’s penciled in a 1:00 lion shave. I’ll be sure to post an after picture. If it’s like last time, Sooks will be wearing her angry eyes. #cats #catsofinstagram #catstagram #pets #petsofinstagram #petstagram #blogger #bookblogger
I recently added this book to my stash, courtesy of Estelle at Forever Romance! You guys know how I feel about sexy ab covers, and that this is an enemies to lovers story is just the icing on the cake! I can't wait to get to this one! Thank you, Estelle. :) Blurb: The New York Times bestselling author of the Marked Men series delivers a romance about a rugged Texas sheriff who must protect the woman who was once his sworn enemy... Case Lawton comes from a family of criminals. So as the sheriff of Loveless, Texas, he's determined to do everything by the book--until he's called to Aspen Barlow's office after a so-called break-in. The last thing he wants to do is help the woman who cost him custody of his son. But Aspen isn't the heartless lawyer Case remembers, and he starts to question his long-held grudge... Aspen is scared for her life, and Case is her last hope for protection. But to get him on her side, she'll have to reveal the painful truth from all those years ago. Now, as they work together to track down a dangerous criminal, Case and Aspen learn to trust each other. And as the threats escalate, it becomes clear there's a thin line between love and hate... because there's nothing Case wouldn't do to keep her safe. Includes It's All About That Cowboy, a bonus novella by Carly Bloom! #LovelessTexas #JayCrownover #BookMail #FinishedCopy #ContemporaryRomance #Romancestagram #Bookstagram #Bookworm #IGBooks #Blogger #BookBlogger #ForeverRomance #HubbaHubbaCover #ARC