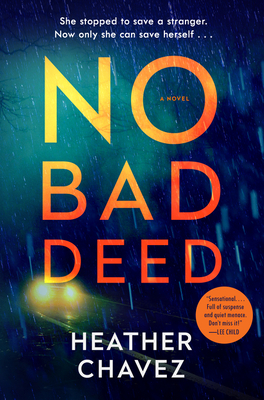 Packed with the electrifying pacing and pulse-pounding suspense of Harlan Coben and Lisa Gardner, a thrilling debut about a mother desperate to find the connections between her missing husband and a deadly stalker who knows too much about her own dark family history.

Driving home one rainy night, Cassie Larkin sees a man and woman fighting on the side of the road. After calling 911, the veterinarian makes a split-second decision that will throw her sedate suburban life into chaos. Against all reason and advice, she gets out of her minivan and chases after the violent man, trying to help his victim. When Cassie physically tries to stop him, he suddenly turns on her and spits out an ominous threat: “Let her die, and I’ll let you live.”

A veterinarian trained to heal, Cassie can’t let the woman die. But while she’s examining the unconscious victim, the attacker steals her car. Now he has her name. Her address. And he knows about her children. Though they warn her to be careful, the police assure her that the perpetrator—a criminal named Carver Sweet—won’t get near her. Cassie isn’t so sure.

The next day—Halloween—her husband disappears while trick-or-treating with their six-year-old daughter. Are these disturbing events a coincidence or the beginning of a horrifying nightmare? Her husband has been growing distant—is it possible he’s become involved with another woman? Is Cassie’s confrontation with the road-side attacker connected to her husband’s disappearance? With all these questions swirling in her mind Cassie can trust no one, maybe not even herself. The only thing she knows for sure is that she can’t sit back while the people she loves are in danger.

As she desperately searches for answers, Cassie discovers that nothing is as random as it seems, and that she is more than willing to fight—to go the most terrifying extremes—to save her family and her marriage.

I’ve always been a fan of Thrillers, particularly in movies, but it wasn’t until last year that I really grew to love them on page. And I have to say, if I could take one of the Thrillers I’ve read and have it appear on the big screen, it would be this one! It’s mind boggling to me that No Bad Deed is a debut. This is a book I lived and breathed while I was reading it; I don’t think wild horses could have pulled me away. When Cassie Larkin stops one rainy night to help a woman who’s the victim of an assault in progress, she has no idea how much her life is about to change. And the next day, when her husband goes missing, she’s convinced he was kidnapped. But the more digs, the more she wonders if it has to do with the shaky ground their marriage was on. To say that this book was full of twists and turns would be an understatement. There were so many players in this book; nothing was what it seemed, and things were so messed up. Even Cassie, whose point of view I was reading from, was suspect to me. There was also a twist at the end of this book that was clear the reader was supposed to see coming, but Cassie had no idea, and it really ramped up everything that was happening and had my pulse pounding.

I’m not going to say any more about the plot, because I think there are lots of things that would be considered spoilery, but know that this book was so enthralling and is not to be missed if you enjoy a good Mystery/Thriller. It’s hard to believe that this book wasn’t even on my radar until a random email put it there. And I am so thankful that it did! No Bad Deed had the same feel that the older movie Double Jeopardy did (the one with Ashley Judd and Tommy Lee Jones,) and similar to that movie, this one is about the lengths a woman will go to to get her family back and keep them safe. Obviously I would recommend this book to you. But I am left with one burning question: Heather Chavez, if this is what you come out of the gate with, what the hell else do you have up your sleeve?

4 thoughts on “ARC Review | No Bad Deed by Heather Chavez”