Gone by Midnight by Candice Fox 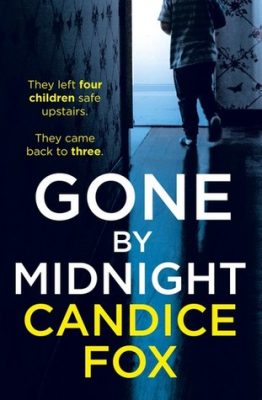 On the fifth floor of the White Caps Hotel, four young boys are left alone while their parents dine downstairs.

But when one of the parents checks on the children at midnight, they discover one of them is missing.

The boys swear they stayed in their room. CCTV confirms that none of them left the building. No trace of the child is found.

Gone by Midnight is the third installment from the Crimson Lake series. This is my first read, from Candice Fox, but you’d best believe that with this introduction to the author’s writing, I’ll be going back and reading the rest! This book had so much going on, and while that might be the kiss of death in some books, it was perfect in this one.There are a lot of players in this story, but Ted seems to be the main character to me. Maybe because he was the first main character I ‘met.’ And I liked so many things about him. I love how he’s so attached to his geese because even after being released for a crime he didn’t commit, people shun him and they’re all he has. And they mean everything to him. I love how excited he is to see his daughter after being separated from her for so long. I just loved his character. His partner in crime, Amanda, was one of the most messed up women I’ve ever read, but damn if she wasn’t so much fun to read. I love her and her wild mouth and her motorcycle gang friends. I liked her fearlessness in dealing with the cop who was targeting her; she wasn’t going to back down no matter what, and the culmination of that whole plot thread was unexpected. Her story line, and the fact that I think there’s so much of her history I don’t know, is one of the main reasons I want to go back and read the previous books.

This story is jump-started when a woman’s son goes missing from a hotel room, and when they begin to focus on her as a suspect, she calls Ted in as a private investigator, as he knows what it’s like to be wrongly accused. And this was another thing to love about Ted – even though he was so excited to have his daughter stay with him, he couldn’t help but take this case, because he knew what she was about to go through.

I won’t say anything more about the plot because I don’t want to spoil it for you, but I will say that once this book started, the pacing never let up. And there are glimpses into the lives of Ted and Amanda off the clock; I enjoyed both, and as they are recurring characters throughout the series, I am glad to see that we do get parts of their personal lives. One of the most interesting aspects of this story was the psychological component; it was so unbelievable, except that I do believe it could happen. And it was just so brilliant.

I really loved this book, and not to sound like a broken record, but I can’t wait to read the rest of the series! If you like a fast paced thriller with at least one morally gray main character, I think you’ll enjoy this one.

6 thoughts on “ARC Review | Gone by Midnight by Candice Fox”